This is an excerpt from my free eBook, Brad’s Sure Guide to SQL Server 2008.

I think most of us are familiar with this situation: a SQL Server database is the backend of an OLTP (Online Transaction Processing) application, but you are required to allow users to run any reports they want on the production data, any time they want. This often results in long-running reports that negatively affect OLTP performance. Haven’t you ever wished you could limit the amount of hardware resources allocated to reporting, so that normal production activity is not affected?

In SQL Server 2008, you can. The Resource Governor, available only in the Enterprise Edition of SQL Server 2008, is a technology that allows you to selectively control how much CPU and memory resources are assigned to a particular workload. For example, the Resource Governor allows you to specify that no more than 20% (or any figure you designate) of CPU and/or memory resources can be allocated to running reports. When this option is turned on, then no matter how many reports are run, they can never exceed their designated resource allocation. Of course, this will reduce the performance of reporting, but at least now production OLTP activity won’t be as negatively affected by reports.

Currently, Resource Governor only works within the database engine. It does not work with Integration Services, Reporting Services, or Analysis Services.

Managing Unpredictable Workloads
As in my reporting example above, it is often difficult to know how your SQL Server resources are being used. While OLTP activity might follow a predictable pattern, there is no knowing when a junior marketing executive will start running reports against your server. Resource Governor allows you to classify different types of loads on your server, which in turn allows you to control how server resources are assigned to a given activity. In SQL Server 2005 and earlier, queries fought amongst themselves to decide which one would grab the necessary resources first, and it was hard to predict who would win out. By using Resource Governor, I can instruct SQL Server to limit the resources a particular activity can access. In this way, I can ensure that my predictable OLTP performance is not hurt by unpredictable activity.

Putting Limits on Run-Away Queries
Closely related to the problem of managing unpredictable workloads is the difficulty of dealing with “run-away queries”. If you have been a DBA for very long at all, you will have seen queries that seem to take forever to run, tying up valuable and limited physical resources, and hurting the performance of other activity on your server. By limiting user or applications that have the potential for executing run-away queries, then run-away queries become much less painful because they can never use more resources than have been assigned to them.

Establishing Workload Priority
Most SQL Server instances have different demands placed on them throughout the day or week. For example, an OLTP server may need to be up 24/7 and maintain a specific service level. On the other hand, this same server may need to run SSIS jobs and maintenance jobs in order to properly function. When these jobs kick in, there is the potential that they can interfere with production work. Resource Governor allows you to allocate resources in such a way as to ensure that priority OLTP activity runs without interference from necessary maintenance jobs.

Prioritizing Preferred Users
For better or worse, Resource Governor allows you to assign specific users, or groups, higher priority than others, on an arbitrary basis. One of the inevitable consequences of this is that, as soon as managers hear about it, you may be asked to give priority to certain users over other users. Hopefully you can avoid this political battle, but you may not be able to. As George Orwell puts it in his novel, Animal Farm: “All animals are equal, but some animals are more equal than others”.

The best way to explain how the Resource Governor works is to walk through an example. Let’s assume we have a SQL Server 2008 instance, with a single database, that is designed to store data from an ERP (Enterprise Resource Planning) application. This is essentially a 100% pure OLTP application that must provide a specified service level 24/7. Let’s also assume that the reporting for this ERP application is not done through the application, but via a third-party reporting tool, directly against the database. In addition to running standard reports, the reporting tool permits users to run ad-hoc reports anytime they want. Essentially, this reporting can be considered an OLAP (Online Analytical Processing) activity.

This is a classic example of OLTP and OLAP activities running on the same server, against the same database, at the same time. As most of you know, this is a terrible architecture because it can result in non-time sensitive OLAP reporting blocking time-sensitive OLTP activity, potentially preventing you from attaining your specified service level for the ERP application. Unfortunately, as most of you will also know, this architecture is all too common. As the DBA, you want to use Resource Governor to ensure that your ERP application attains its specified service level, while at the same time, allowing reports to be run, but at a lower priority so they don’t interfere with OLTP activity. To accomplish this goal, you have decided that you want to limit both the amount of SQL Server CPU and memory resources used by the Reporting application to a maximum of 20% of what the server has available. Based on your research, you have determined that, with this restriction in place, your ERP application can consistently attain its service levels.

Besides using the APP_NAME() function to differentiate one workload from another, Resource Governor can use other system functions, such as HOST_NAME(),SUSER_NAME(), SUSER_SNAME(), IS_SRVROLEMEMBER(), and IS_MEMBER().

At this point, all we have done is to separate out the connections from each application. As yet, we still have not allocated any resources to these connections, and this is the next step.

Associated with every workload group is a resource pool. A resource pool represents the physical resources of a server. It is used to allocate the minimum and maximum amount of CPU and/or memory that is to be allocated to a specific type of SQL Server connection. For example, if you want to limit the connections from the Reporting application to no more than 20% of the available CPU and memory resources of the server, then you will configure a resource pool with this information.

Once a connection has been classified and put into the correct workload group, then the connection is allocated the CPU and memory resources that have been assigned to it, and then the query is passed on to the query optimizer for execution. In our example, Reporting queries would be allocated resources in such a way that they would not use in excess of 20% of the CPU and memory resources when passed to the query optimizer for execution.

Now, let’s go through an example of how to configure the Resource Governor, based on the Reporting example we’ve used throughout the chapter.

The first step is to create a resource pool, each for the ERP and the Reporting applications.

As you can see above, the CREATE RESOURCE POOL statement has a number of parameters.

Next, I need to create the workload groups that will act as containers for the user connections that are defined in the classification user-defined function. During this same step, I also associate to each workload group one of the resource pools I just created. 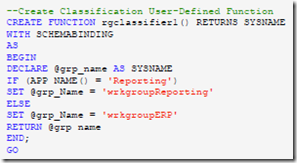 We are almost done, but we have a couple of maintenance tasks to perform before our Resource Governor will work. First, we need to run the following code, which assigns the “rgclassifier1” function to the Resource Governor.

Second, we need to run the following code, which enables the Resource Governor.

As you can imagine, there is a lot more to the Resource Governor than what I have discussed in this chapter. I have left out a lot of details, including additional configuration options, how to make changes after the fact, how to monitor if the Resource Governor is running properly, and troubleshooting information. If you are interested in learning more about the Resource Governor, I suggest you dive into Books Online and begin experimenting with it on a test server.

While Resource Governor offers many potential benefits, it also offers some potential pitfalls. For example, a misconfigured Resource Governor can not only hurt a server’s overall performance, it can potentially lock your server up, requiring you to use the Dedicated Administrator Connection (DAC) to attach to the locked up SQL Server in order to troubleshoot and fix the problem. Because of this, I highly recommend that you only use this option if you are an experienced DBA, and that you first test your configuration on a test server before rolling it out into production.

One thought on “Introduction to the SQL Server 2008 Resource Governor”