Not a tsunami, but high surf on the Kohala Coast, near where we live.

We received the first phone call at 4:35 AM Saturday morning. My wife answered the phone, and I figured that it was a wrong number or some friend or family calling from the mainland, forgetting about the time difference. I didn’t listen to the conversation, going quickly back to sleep. At 5:45 AM we received our second phone call. This time I put my pillow over my head to avoid hearing the phone conversation, but it didn’t work because this time around my wife shook me and called my name. I groggily uncovered my head from the pillow, and she said that this was the second phone call about a tsunami warning.

We turned on the local TV station, and learned that a tsunami was predicted to hit the Big Island of Hawaii (where we live) about 11:05 AM, due to the tragic 8.8 earthquake in Chile. We live just outside the tsunami inundation zone, about 3,800 feet from the ocean, at an elevation of about 70 feet. According to our condo “Resident Emergency Plan,” we are encouraged to stay in our home during a tsunami warning, unless otherwise directed to leave by Civil Defense authorities. Since our Emergency Preparation supplies are at our home, my first inclination was to stay home. Then we got out third call at 6:08 AM. My daughter was having a family friend stay over Saturday night for a sleep over, and our friend’s mother was worried about her, and wanted to rush down to get her. I say “rush down” because she lives in Waikoloa Village, which is sitting about 1,000 above sea level, and about 5 miles from the ocean.

We live in a condo marked by the red “X” above, just outside of the inundation zone (marked in grey).

Not knowing if anyone would be allowed to enter our area (you can leave, but usually can’t get back in our area during a tsunami warning), so my wife and I decided to bring our daughter’s friend home. We were also invited to stay with this family, very high above harms way. So not knowing the extent of the tsunami warning (there still wasn’t much useful news on the TV at this early time), we packed our emergency supplies in the car, and drove to our friend’s house to wait out the warning. As we left the area we live in (there’s only one road in and out), civil defense and police were already at the entrance, warning people away. We later learned that they did allow people in until 10:00 AM, but after that, the entrance was sealed until after the tsunami warning had ended.

After we arrived in Waikoloa Village, and our friend’s home, all the adults sat around the TV, while all the kids went and played. The kids didn’t seem to concerned. Eventually, we got more information from the Tsunami Warning Center, located in Hilo, HI, which is the opposite side of the island we live on. They were only predicting a 6 foot tsunami, while not a large one, it was something to take seriously.

The entire state of Hawaii was under a tsunami warning, and all low-laying areas were evacuated. In the area where we lived, 1,500 people (employees and tourists) were evacuated from the Hilton Hotel (which is next to the ocean). Fortunately, we missed all of this excitement because we had already left the area. Overall, especially on the island of Oahu, which is the most populated, the evacuation was a big deal because over 50,000 residents and tourists live in evacuation zones. We watched all of this on the local TV station. Fortunately, because of the early warning, the evacuation went very smoothly.

What is interesting is that this is the second time in recent history that the entire state of Hawaii was evacuated (from inundation zones) due to a tsunami warning. The other time was in 1994, and coincidently, I was living in Honolulu (on Oahu) at the time. During that warning, I was about to drive off to work at 6:00 AM in the morning, and just before leaving home, my boss called me about the warning (I didn’t know about it), and I ended up staying home all day. Fortunately, this tsunami, which originated from Japan, only caused a minimal tidal surge.

As we were waiting for 11:05 AM to come around, we also learned on the local TV station that the on-coming tsunami had hit the Marquises Islands, and that indeed they had a 6 foot tsunami, as predicted. So why was this important, and also chilling at the same time? In 1960, an earthquake off the coast of Chili, in a very similar location to the one that had just occurred, had spurred a large tsunami that hit both the Marquesas Islands, and Hilo on the Big Island. Sixty-one people in Hilo died from this tsunami. In the 1960 tsunami, the height of the tsunami was the same on the Marquesas Islands and Hilo, so scientists made the assumption that the tsunami heights would probably be the same this time around. So after hearing this, we were indeed expecting a 6 foot tsunami.

The most interesting scene we watched on TV, as it slowly came upon 11:05 AM, was a camera that was attached on the top of a hotel in Hilo that showed Hilo Bay. Hilo bay is shallower that virtually all other bays in Hawaii, which makes it especially susceptible to tsunamis (that’s why the death toll in the 1960 tsunami). What was also interesting about this camera shot was that is was virtually identical to the view we had of Hilo Bay when we stayed at this same hotel last December. We knew exactly where the shot was taken from, and were quite familiar with the area.

As we watched this scene of Hilo bay, we made it a point to find landmarks where the edge of the ocean was touching the shoreline, so we could see if the ocean height changed or not. When 11:05 AM rolled around, nothing happened. But about 11:25 AM, we begin to notice that the water was getting lower (this was a time when the tide was supposed to be rising). After a while, it began rising again, but to no higher than it had originally been. In the 1960 tsunami, there were three major surges, with the third one being the largest and most dangerous. Then the water started lowering again, this time, much faster, and even more of the bottom of the bay could be seen, and then it raised again to its original level, but faster than before. The third time, as the water began to flow out, it looked like a raging river as the water went out, and then shortly thereafter, the water came back in. After about 4 or 5 surges, the water begin to now raise above its normal level, spilling over the edge of the high water marks, covering the bases of some palm trees. This continued for several hours, with water levels raising and lowering a maximum of about 9-10 feet in Hilo Bay, and up to 2 feet in other parts of the island.

Officially, the tsunami was 2.8 feet on the Big Island, and lower for the other islands. Other than some scratched boats, no damage was reported. Scientists at the Tsunami Warning Center in Hilo aren’t sure why the tsunami was only 2.8 feet in Hawaii and 6 feet in the Marquises Islands, but there are so many different variables, it is hard to make any kind of accurate prediction (such as the tide level during the tsunami).

While the full-blown evacuation was not necessary, based on the actual event, it was still probably a good idea as it kept people out of the water, where the tidal surges could have caused problems for anyone in the water at the time they occurred.

After the tsunami warning was called off about 1:45 PM. We decided not to return home immediately, as we figured that traffic might be bad in our area as people returned, so we went for a drive through part of the central part of the Big Island. As we drove, we noticed a Coast Guard C-130 plane has been stationed in a nearby, small airport, and all the Hawaii State-run beach access points were still closed, even after the warning was over. Another interesting thing we noticed, and this may be purely coincidence, was that as we were driving through some cattle ranches, that hundreds of cattle had gathered at the fences next to the highway. While it is not unusual to see herds of cattle in this area, I had never seen so many at one time before. And a little further up the highway, we saw a large herd of horses. In this area you rarely see many horses, but there were dozens of them, all huddled together next to the fence.

The next day we went for a walk at Anaehoomalu Bay (called A-bay by locals), which is just down the street from where we live. One thing I noticed (the photo below), was a strange discolorations in the water, which is not normal. Apparently, a lot of the surrounding areas near the shores of the island showed signs of unusual color and activity after the tsunami. 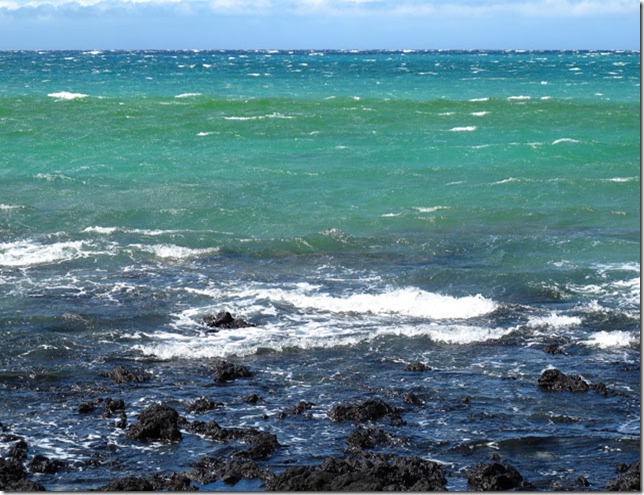 The yellow-green color of the nearby water of Anaehoomalu Bay is not normal. It generally looks more blue, like the color you see in the distance.

While many people consider living in Hawaii as paradise, it is subject to not only tsunamis, but hurricanes, earthquakes and volcanic eruptions. So calling Hawaii “paradise” is really not a fair reflection of what Hawaii is. On the other hand, if you like adventure, then Hawaii is the place to be. In fact, that is one of the main reasons we decided to move here.