While I have always known that the Windows operating system Power Plan options affect a server’s performance, I had not realized how much until SQL Server MVP Glenn Berry (Blog | Twitter) suggested I try out my new Dell T610 test servers under the three available power savings plans:

While it’s hard to perform a “real-world” CPU benchmark test, Glenn suggested I try using the Geekbench CPU benchmark software. The software runs a series of CPU and memory tests and produces a Geekbench Score which provides a standardized way to compare CPU performance.

To find out how much the three OS Power Plan options affected the performance of my T610, I first set the system BIOS in the Dell Setup program to “OS Control.” Dell not only allows you to set the BIOS to “OS Control,” which means the OS controls the power savings, it also includes other power savings options that are not controlled by the OS. I only tested the “OS Control” option.

Next, I went to the Control Panel and changed the Power Plan setting to “High Performance”. 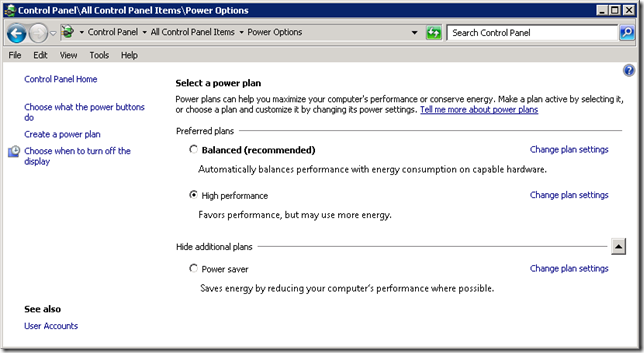 When I ran the test using the “High Performance” option, the Geekbench Score was 10,562.

Next, I changed the Power Plan to the “Balanced” setting, and the Geekbench Score was 7,991, a drop of about 24% in performance from the “High Performance” setting.

And last, I changed the Power Plan to the “Power Saver” setting, and the Geekbench Score was 7,075, about drop of about 33% in performance from the “High Performance” setting.

While the OS Power Plan settings affect more than just CPU, it becomes obvious from this simple test that changing the Power Plan can significantly affect a CPU’s performance, which in turn could significantly impact the performance of a SQL Server instance.

Of course, these three power options are available because they allow you to make a tradeoff between performance and power savings. As the DBA, you have to determine if the power saved by running the CPU more slowly is worth the performance tradeoff. The only way to really check this out would be to use a wattmeter to determine how much electricity is saved for each different settings. I don’t have a wattmeter to try this out, but Glenn has reported in some of his testing that the power savings appears to be insignificant, especially when compared to the significant drop in CPU performance between each “Power Saver” plan.

The point of this post is that when your configure your SQL Server’s hardware, you need to investigate what the appropriate “Power Saver” plan your server should be running. Based on this simple, initial testing, I think I’ll leave mine on “High Performance”.