With each episode, DBA in Space becomes goofier and goofier. Episode four is also set at the “History of Computing Exhibition”, as the previous episode, but from a slightly different angle. At the right side of the screen you can see an Osborne 2 portable computer. I used to sell these many years ago at a local Computerland store in Springfield, MO, for $1,995, which included a free copy of dBase II, among other software.

When the scene starts, neither alien Brad or Miss Friday (Nell Mooney) realize the camera is running, and Miss Friday is talking to herself. Actually, Nell is improvising, as there were no lines in the script for her to say. Each different take resulted in substantially different improvisations, and it was difficult for me to keep from laughing at what she said. Most of Nell’s funniest improvisations were not used, and some of them were not fit for family viewing, but she was hilarious. 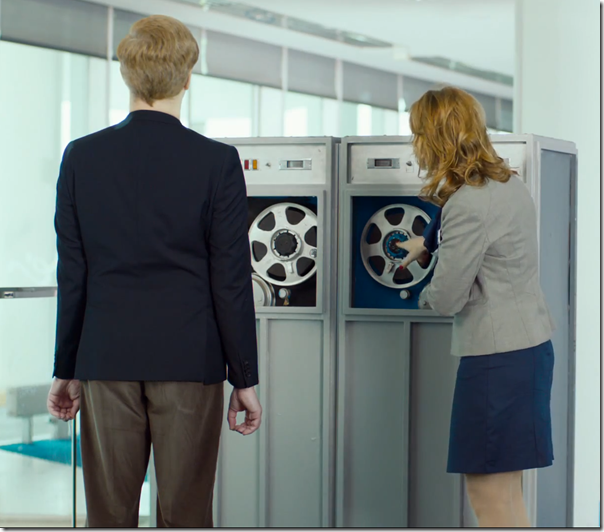 More often than not, I was smiling as Nell improvised her lines before the scene began. Fortunately, you can’t see my face.

Eventually, Miss Friday realizes the camera is on and she begins to speak. Once alien Brad sees her turn around, alien Brad, or I should say, alien Brad’s head, turns around to see what is going on, and then alien Brad’s body follows suit. Miss Friday doesn’t notice this as alien Brad is standing next to her and she is focused on the camera.

The 180 degree head turn was a result of lots of practice. I learned an ancient Yoga technique that allowed me to perform my own stunt. Well, not actually, it was done using a simple green screen technique and a little CGI. To perform the stunt took two different takes. In the first one, I simply scooted my feet slowly around so that my body and head followed as well. Then I repeated the same thing, but this time, in front of a green screen. By using a little bit of CGI magic, the two images were combined, allowing it to look like my head was turning 180 degrees. You may have also noticed the grinding sound as my head turned. While it might have sounded like my neck cracking, it was only sound added in post-production added for fun.

Although it may not be obvious, but in this scene, alien Brad is beginning to get used to his new human body. Although the skin tone is still off, the slime is gone, he controls his body slightly better, and, just barely, begins to talk a little bit better. As Miss Friday talks about computers, alien Brad notices something above his eye line (alien Brad is supposed to be on a set filming the DBA in Space questions) and notices the boom microphone, and being inquisitive, grabs it to take a look. But as alien Brad examines the microphone, it notices that Miss Friday says Mars, which gets alien Brad’s attention, and it releases the boom. Miss Friday continues with the question of the day, and when she refers to the question as being a real head scratcher, alien Brad takes her literally and it scratches her head. While alien Brad is getting better at being human, it still has a long way to go. In spite of all of alien Brad’s odd antics, Miss Friday still doesn’t really seem to notice. I guess she thinks DBAs are just a little bit odd, and she polity ignores the unusual behavior.

It was odd to be scratching Nell’s head, over and over again, take after take.

Because this scene was so goofy, it was hard to keep a straight face during all the takes. I felt really odd grabbing the boom microphone and then scratching Nell’s head, over and over again, as we did multiple takes at both wide angles and for close-ups. And in spite of all the rumors you may have heard, Nell does not have head lice.

After this episode ran, I got a lot of e-mail and Tweets about me looking a lot like Commander Data from Star Trek: The Next Generation. While this was not intentional, I can certainly see that now.

In my next installment, I talk about filming questions two and three.