Part 2 of Question 8—The follow up to the question.

Episode eight is another Friday task-related question. On the previous Fridays, I wasn’t involved in any of the scenes. But on this Friday I performed my longest dialogue of all the episodes, although you never see my face. That’s great, because I didn’t have to memorize any lines. All I had to do was read them.

Next, you see a fuzzy video of the Martian boss, who is having a conversation with alien Brad, in which you find out that alien Brad accidently crashed to Earth, and really, really wants to get back home on Mars. You also learn that the Martian boss is really alien Brad’s father. “Look, I am your father!” Alien Brad’s father is not really interested in helping out his son, so Alien Brad tells his father that he has found some Source Control software that is better than what they have on Mars. The father finally relents, and agrees to pick up alien Brad from Earth, but only if alien Brad can upload the software back to Mars first.

After viewing the transmission, and the task-related question being completed, Miss Friday comes back on screen, confirming that alien Brad stored the database and SQL Source Control software in the communications center, and hopes to use the equipment there to send the software back home to Mars. 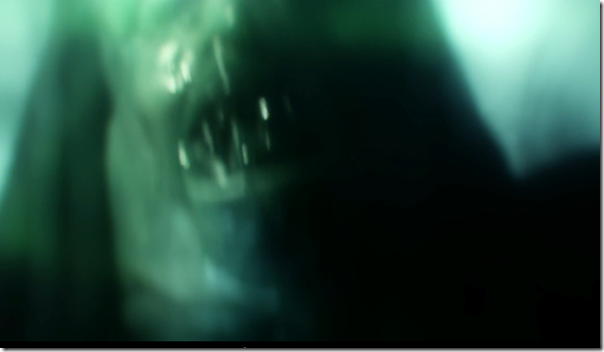 I wasn’t involved in the scenes with Nell, but I was involved in with scene where Alien Brad talks to his father. It was interesting to see how the scene was done. The alien father is just a rubber mask worn by an actor that is covered with a lot of slime. The lighting, camera focus, slime on the lens, and additional CGI was used to make it look like a very bad video connection, kind of like Live Meeting would provide between two planets. While the actor read his lines and moved around accordingly on screen while wearing the mask, his words were not used for the video. Instead, the voice of the alien father and alien Brad were done in a sound studio, then dubbed in later during post-production.

The alien father’s voice was played by actor Philip Madoc, a famous Welsh movie and television actor. He has appeared in The Bourne Identity, The Last of the Mohicans, Doctor Who (the TV series), Space 1999, The Avengers (the original TV series) and dozens and dozens of more roles. 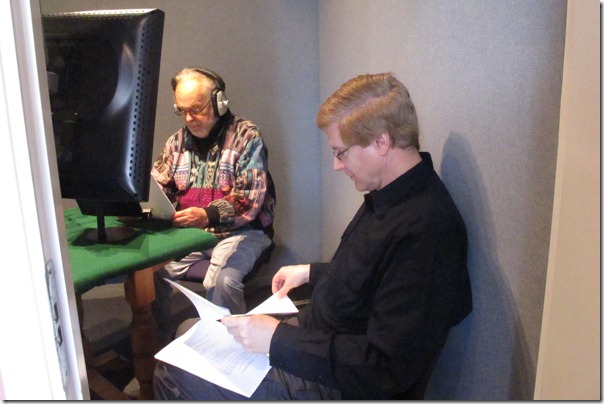 Philip Madoc and me in a sound booth, recording our conversation.

When the director, Will was looking for a voice to use for the alien father, he had many to pick from, but Philip was his first choice, and Philip was more than willing to do the voiceover. To do the voices, Philip, Will, a few people from The Mill and Red Gate, and me, traveled to a sound studio in London near Heathrow airport. This was done the week after all the main shooting. The studio was very small, barely large enough for two people. In fact, I think it was designed only for one person, but both Philip and I managed to squeeze into the sound booth together. Interesting fact: Philip has never used a computer in his life, and has no plans for ever doing so.

Before showing up for the recording session, Philip had read through his part of the, but he had not seen the entire script, so he had no idea what the lines meant, as they were out of context for him. So Will explained the motivations behind the lines, and Philip quickly understood what he needed to do. Philip was a consummate professional and did his lines with great passion. We recorded the conversation three different ways. First, Philip and I sat in the booth together and read our lines several times, trying different things. Then I left the booth, and Philip did his lines inside the booth, while I read my outside of the booth, with him listening to me with his headphones. This way, only Philip’s voice was recorded and not mine. Once Philip was done, he was on his way home. Next, I got back into the booth so I could record my lines by myself. This time, the sound technician played back Philip’s lines through headphones so that I knew when to speak. Once we were done, the sound editor had many takes to choose from to create the final voice track. This track was then matched to the video shot of the other actor inside the rubber mask, bringing everything seamlessly all together.

It’s my turn to do the lines of alien Brad talking to his father.

One of the things I liked about doing this scene was that I didn’t have to worry about memorizing my lines. If you listen carefully to my dialogue, you will hear a little bit of acting in it, as I made an attempt to use my voice to express some emotion, something that I rarely did when acting before the camera.

In my dialogue in the video, you will probably also notice that I sound a little different than usual, as they lowered the pitch of my voice somewhat. I guess this is because, in a sense, what you are hearing is a “translated” conversation from Martian to English, and the voices would be what our normal Martian voices would sound like, assuming we spoke English. The universal translator was hidden from the camera’s view, in case you were interested.

In my next installment, I will talk about filming question nine.