Judging any contest is difficult, as you want to be as fair as possible. So coming up with the final 15 contestants for the DBA in Space competition was not an easy job for the judges. But as you have probably already learned today, they have made their decision, and the final 15 will go before a vote of the public to decide which lucky DBA will have an opportunity to fly into space.

Red Gate Software invited three people to be the judges, which included Simon Galbraith (Joint CEO of Red Gate Software), Buck Woody (well known DBA and former NASA employee), and Graham Coxon, an (English singer-songwriter whose former band, Blur, were responsible for composing the call signal for the Beagle 2 mission to Mars in 2003).

All three judges selected their favorite 15 Tweets in a double-blind process, so that none of the judges knew which DBA submitted which Tweet. While there is a lot of subjectivity in how a judge evaluates a Tweet, it turned out that there was a high level of agreement between all the judges as to which of the Tweets best fit the judging criteria of “(a) relevance to the database administrator community; (b) how innovate the Tweet was; and 3) relevance to the theme of space.”

Now that the final 15 have been selected, there is only one week for the final 15 to market themselves to the public, and for the public to place their votes, which is “over a period of 7 days commencing at such time as the Finalists are announced on 6 December 2011 and closing at 12:00 (UTC) on 13 December 2011.”

So why not join in and help your favorite contestant win the greatest adventure of their lifetime by voting at the www.DBAinSpace.com website. Anyone can vote up to once a day for their favorite contestant, so make sure you take advantage of this and vote every day until the contest ends on December 13, 12:00 (UTC).

More About the Judges

Graham Coxon is an English singer-songwriter, multi-instrumentalist and painter. He came to prominence as the lead guitarist, backing vocalist and occasional lead vocalist of rock band Blur, and is also a critically acclaimed solo artist, having recorded seven solo albums. Blur were chosen to compose the call signal for the Beagle 2 mission to Mars in 2003. Graham’s artistic and musical contribution is featured on all seven of Blur’s studio albums, and he was voted the 15th greatest guitarist of the last 30 years in a national 2010 BBC poll. 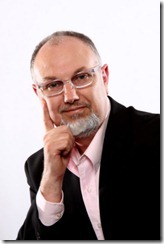 Buck Woody has been working with Information Technology since 1981 and is currently a Senior Technical Specialist for Microsoft, working with enterprise-level clients to develop computing platform architecture solutions within their organizations. He has worked for the U.S. Air Force, at an IBM reseller in technical support, for NASA, and at the U.S. Space Command as an IT contractor. He has worked in most all IT positions from computer repair technician to system and database administrator, and from network technician to IT Manager; and with multiple platforms as a Data Professional. He has been a DBA and Database Developer on Oracle systems running on a VAX to SQL Server and DB2 installations.

Simon Galbraith is co-founder and joint-CEO of Red Gate Software (his fellow CEO is Neil Davidson) and he’s been helping to grow it and make it a great place to work since it started in 1999.

We want to thank the judges for all the time and effort they made in judging the competition.