Part 2 of Question 14—The follow up to the question.

As the previous episode was the climax, this final episode is the denouement of the series. It starts out with the real Brad welcoming the audience to episode two of DBA in Space at the Lunar Surface Exhibit of the Roddenberry Launch Center. Of course real Brad has been in stasis for the past month, and hasn’t yet realized that any time has past, so Miss Friday has to tell him it’s really the last episode. This seems to distress real Brad, but he knows what will cheer him up, Jar Jar. So real Brad begins to look for Jar Jar around the set. Miss Friday doesn’t want to surprise real Brad too soon about Jar Jar’s demise, so she changes the topic and directs a message to the audience, recapping her experience of forcing an alien hoard to retreat, a slight exaggeration, but she wants to impress his boss over at the NSCC. Brad is really confused after hearing Miss Friday talk about aliens, as he still doesn’t understand what is going on. In fact, real Brad decides he might be better off not knowing what really happened.

Then real Brad reads the last question, which, like he said, was a “real humdinger”, as it was so long and convoluted. Then Miss Friday says, “And as Private Hudson would say,” and then real Brad says, “That’s it. Game over man. Game over.” If you don’t know the sci-fi reference, it is from of the last scenes of the movie Aliens.

And finally, both the real Brad and Miss Friday walk off the set, not realizing that they are still on camera, tip toeing through the set as not to get their shows too dirty. The shoes I was wearing as part of my costume cost about $450, although this had nothing to do with the scene, which was a joke. 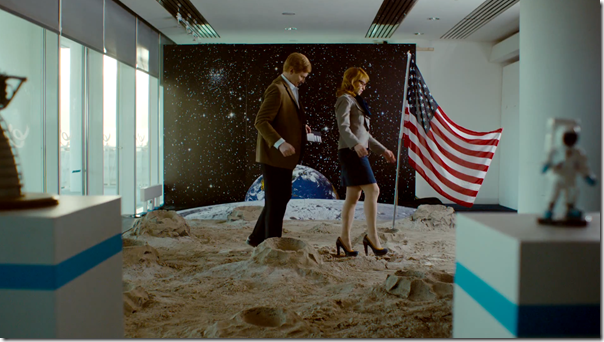 Real Brad and Miss Friday aren’t aware they still are on camera.

After the last question is answered, there is a short follow-up scene. You see an origami unicorn on what appears to be on the surface of the moon, then a hand picks it up. Then there is a cut to real Brad holding the unicorn, who is shushing the audience, and then he walks off the set. If this scene doesn’t make a lot of sense to you, then you are not a big fan of Blade Runner, where an origami unicorn was used to symbolize the fact that the character played by Harrison Ford hated that he was a replicant. 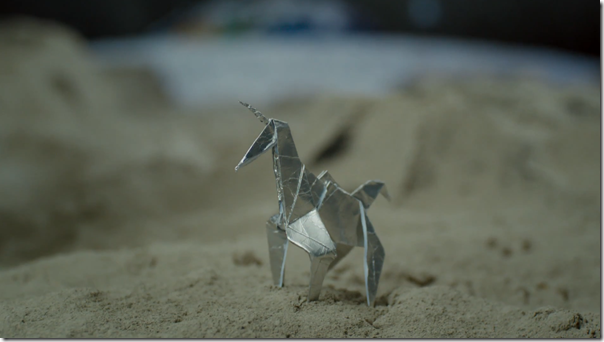 The origami unicorn gag was from the movie Blade Runner.

So what does that mean in the context of this last scene? Well, if you use your imagination, keep in mind that alien Brad hated the fact he was in human form and that he really wanted to return to Mars. Earth just wasn’t his forte. But if alien Brad was transported back to Mars, why is real Brad showing off the origami unicorn and then shushing the audience about having it? Is it because real Brad is not the real Brad, and who maybe is really alien Brad? Perhaps alien Brad wasn’t able to get back to Mars, but has now had time to perfect his human skills and has taken real Brad’s place, accepting his fate that he now has to live on Earth the rest of his life. If so, what happened to the real Brad, and when did the switch take place? Some mysteries must be kept secret.

I find it very difficult to memorize anything exactly, which made it very difficult for me to memorize my lines. With the exception of this last episode, I was, just barely, able to remember my lines, but for this episode, I needed help, as question fourteen was long, and I needed to be very precise. So for the beginning of the scene, I did recite my lines, but when I needed to ask the question, I used a card to read it from, as there was just no way I was going to get it right. Within the context of the scene, I think that reading the question from the card worked fairly well, given that many newscasters do the same, and it is a common thing for people to see.

The very last scene, with the origami unicorn, was done very quickly. The shot was first set up by the crew, and in the first cut all I had to do was to pick it up. Then the scene cuts to me shushing, and then leaving the set. I think we did this in just a couple of very short takes. This was one of the last scenes filmed, as I was finally beginning to feel comfortable in front of the camera.

This is the last of my journal. Although it totals over 16,000 words, it just barely covers my experiences as an actor in DBA in Space. In fact, the entire experience seems very surreal, as though it never really happened. When I go back to watch the videos, it does stir up memories, but other memories seem to have already disappeared. Perhaps it was the stress of doing something new that has prevented me from remembering every little detail, as I would like to remember. Or, more likely, its just my poor memory and my lack of being able to remember precise details. In any event, this was a great experience for me, and in fact, if I were offered the opportunity to do it again, I would.